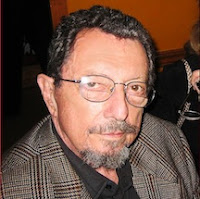 Today we have a unique Virtual Book Tour for you – a married couple who each have published books of their poetry, Gloria Vando and Bill Hickok. Gloria has been writing poetry since she was in junior high school but for Bill it’s a more recent avocation. Gloria’s poetry has won her accolades and awards over the years and Bill has now received rave notices for his first book, published close to his 80th birthday. We welcome them warmly to our blog today to talk about their love of poetry.

NR: Bill, you just published your first book, The Woman Who Shot Me & Other Poems, at age 80. As a cousin of Wild Bill Hickok and after a career in construction, how did you begin writing poetry?

Bill: Actually I’ve been writing for years – it comes easily to me. When I have an idea, I can just start, with no writer’s block. I’ve done many op-ed pieces for major newspapers – I enjoyed making them humorous. After meeting Gloria at an art opening in Kansas City over 30 years ago and getting married six months later, I began studying poetry. In 1992, we founded The Writer’s Place, a literary center in Kansas City – and ever since we moved to Los Angeles, I’ve been active in a poetry workshop group here.

NR: How do the poems in The Woman Who Shot Me reflect who you are now?

Bill: The book is a mixture of memory, fantasy, and how I feel today. I’m lucky in that flashbacks to my youth will appear from years ago and I build on that to create a poem. At my age, I have a long span to look back on.

NR: What’s it like living with another poet? How does that affect your work?

Bill: We’re very supportive of each other. We have no ego in it. If one of us asks, “What do you think?” we’ll give suggestions about how to add “meat” to the work – to move the reader through laughter, tears, recognition.

NR: Gloria, you’ve won numerous prizes and honors for your books, including awards for Promesas: Geography of the Impossible and Shadows & Supposes. How did you decide to dedicate your life to writing poetry? 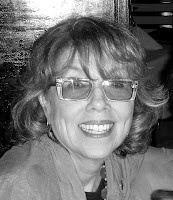 Gloria: It was never a conscious choice. I vacillated between three loves: philosophy, literature, and painting. I thought for a while I would be an artist. But every time I tried to make art I felt inhibited, as though I were communicating in the wrong language, writing with the wrong hand. The correct hand, the comfortable hand, drew words.

But I think my love of poetry goes back to my childhood. I grew up in a family that revered literature. Every aunt, uncle, cousin could recite major poems by heart. My grandmother, with whom I lived as a child, regaled me with poems and stories. She was an avid reader and storyteller. My father was a poet and my mother’s first poetry book was published when she was 68 years old. My daughter, Anika, a singer-songwriter, is now writing poems too, so I suppose it runs in the family. As a child, I attended many Sunday afternoon recitals that featured Latino entertainers in a variety of art forms that included dance, operatic arias, string quartets, classical guitarists, and declamadores, who recited poetry and got standing ovations. Looking back on this now, I see that my early appreciation of poetry must have begun then. I was keenly aware of the deep and sincere respect the sizable Latino audience maintained for poetry and for those who wrote and recited it. I began memorizing poems at an early age. And I began writing them.

NR: What part do you think your multicultural background has played in your poetry?

Gloria: As a member of two cultures I feel a part of, yet apart from, each one – a tricky balancing act, because poems have to be anchored somewhere. I enjoy my bilingualism. Many Spanish words have an emotional content for me that their English counterparts cannot approximate. To write solely in English would be less than satisfying in certain situations. And Spanish has a rhythm and music that I feel enriches my work, especially in my first book, Promesas, which deals with the immigrant experience and my family roots.

One always hopes for a universal theme, one that touches everyone. As artists we are out of the mainstream, the outsiders, so it’s comforting to connect with others through our craft. I hope to gain understanding, empathy, acceptance of other cultures. There is entirely too much unnecessary suffering in the world. Perhaps I can help alleviate a bit of it.

NR: What are your muses? Where does your inspiration come from?

Gloria: Stanley Kunitz said poems are gifts. And they are! They come at odd times and I am thankful for them. I wrote one of my favorite poems, “Growing Into Lilac,” while driving a car on Fairfax Avenue in Los Angeles. Not having a camera, I made a picture with words: “Three women in lilac saris, their scarves / uncurling in the cool afternoon breeze, / carry their children in their arms beneath / a canopy of jacaranda trees,…”

As a rule I prefer to write poetry late at night when it’s quiet and my censors are fast asleep. I let the poem take me wherever it wants. The initial writing is almost unconscious. It’s an adventure, a discovery. I write longhand, in pen, on blank paper so there are no lines to inhibit me. Then I transcribe it to my computer, print it out, revise it, print it out again, revise it again, and again.

NR: In addition to writing poetry, you also publish others’ works. Tell us a little about Helicon Nine Editions, where you are the editor-in-chief.

Gloria: In 1977, I founded Helicon Nine: The Journal of Women’s Arts & Letters – we published the work of over 500 women artists, writers, musicians, and scholars. In 1990 it evolved into Helicon Nine Editions, a small press that publishes fine books of poetry, fiction, essays, and anthologies.

NR: What’s coming up for you now?

Gloria: A truly wonderful project! My mother, my daughter, and I have a book of our poems, Woven Voices: Three Generations of Puertorriqueñas Look at Their American Lives, coming out this spring with the cover done by another daughter, Lorca. I’m co-editing and publishing an anthology of poems about the economy, In the Black/ In the Red: Poems of Profit & Loss, which features prize-winning poets and artists including four poets laureate of the United States and of individual States

NR: What’s it like to work with your mother and daughter?

Gloria: It’s a privilege and a pleasure. My mother is wise and talented and a survivor—she’s 95. She’s also very funny and we giggle a lot. My children are kind, gracious, generous, and they make me laugh. They care about people, the world, the animal kingdom, the environment – they’re activists. And they’re creative: musicians and in theatre. They are, in short, what we call in Spanish, buena gente (good people). They give me hope for the future of our planet.

NR: What advice would you give to other women wanting to pursue a career in the arts?

Gloria: Envision where you want to go and start there. Try to get lots of support. I have this ridiculous idea that I can do anything I set out to do. Now that’s pure nonsense, because I’ll never be able to fly. But I can soar in metaphorical ways. And you can too.

Here’s a story I tell my students. I grew up reading T.S. Eliot, William Butler Yeats, and the other gods of that generation. They were a tough act to follow – not to mention Shakespeare. I once asked Virgil Thomson, the American composer, who had studied music in Paris with Nadia Boulanger, why so many young American composers went to Paris to study with her. “Because,” he said, “she gave us permission not to write like Beethoven. She gave me permission to write like me, a young Baptist from Missour-ah!” I was so happy that I hugged and kissed him, because he had given me permission to write like Gloria Vando—in other words, someone with a unique vision to share and to celebrate!

NR: Our thanks to Gloria and Bill for joining us today and reminding each of us that we have permission to be our authentic selves. If any of you aspiring artists out there have questions for our poet friends, click on “comments” and let us hear from you.

This entry was posted in intimate partner, your self and tagged Bill Hickok, Gloria Vando, Helicon Nine, inspiration, poetry, poets. Bookmark the permalink.