Readers, we’re delighted you’re here at our Virtual Book Tour and we give a hearty welcome to author Anne Kreamer. We first featured Anne and her book, Going Gray, in 2007. We think that you’ll find what she has to say about her new and thought provoking book, It’s Always Personal, very interesting. So let’s get started: 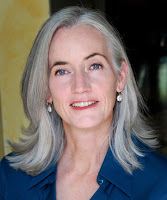 Nourishing Relationships:
What motivated you to initiate the investigation to do this book and is there a personal story behind your desire to do this project?

Anne Kreamer:
My interest in the subject of emotion in the workplace crept up on me, starting from a very personal point of view, then growing in gradual concentric circles to include statistical research and neuroscience. A few years ago I was chatting with my former colleague, Sara Levinson, who has been a top executive within both deeply male (MTV, the NFL) and deeply female (Club Mom, the women’s group at Rodale publishing) professional environments. She asked me a funny question: Did I know any woman who had never cried at work? While I’d obviously never conducted a crying-on-the-job poll of my friends, I realized that no, I probably didn’t. And certainly I had cried, years earlier, when I was a senior vice president at Viacom’s Nickelodeon, the children’s network, and my uber-boss, Sumner Redstone, called me for the first time — and screamed at me.

With that one cocktail-party question, I set off on a two-year journey exploring emotion — negative emotions, positive emotions, all emotions — in the modern workplace. The timing of Sara’s question was also interesting. It came during the recession in America which led to the tectonic plate-shifting fact that women were the majority of the workforce for the first time in history. Secondly, developments in the field of neuroscience meant that also for the first time in history we had the ability to observe living, working brains in action. Those two major new facts led me to wonder if this moment presented a unique opportunity to reassess traditional emotional workplace norms.

N R:
What are the main differences you noticed between men and women in the work place?

A K:
There is not one easy answer to this question — in fact, the answer to this is woven throughout my book and involves both inherent neurobiological as well as socially conditioned differences. But I’ll try and address a few differences.

When equal employment laws were passed in the United States during the 1960s, men overwhelmingly controlled the style and protocols of the workplace, which de facto meant that equality for women meant that they had to adapt and adopt male standards for professional behavior – and really the blandest versions of male behavior at that. As they entered the workforce and for most of the almost half century since, women have been instructed to “man up” and “whatever you do, don’t let them see you cry.” To be successful, many women had to deny and suppress distinctly female parts of themselves — their nurturing impulses, their essential femininity and, as I discovered, aspects of their intrinsic biology. So right off the bat the rules for women were different because women in significant ways weren’t permitted to be themselves.

Let’s look an anger, for instance. In 2007, Victoria Brescoll, who teaches at the Yale School of Management, conducted three studies in which people watched videos of male and female actors pretending to apply for jobs, and sometimes showing anger. Whether the angry female in the experiments was described as a trainee or an executive, both men and women rated the angry woman lower than a comparable man if she showed anger. Additionally, the women’s anger was blamed on her — “she is an angry person,” “she is out of control” — whereas men’s emotional reactions were ascribed to some external factor that seemed to justify anger — “the work was shoddy” or “the report sucked.” In real life angry women at work cry, with tears and blubbering as the unintended, rechanneled byproducts of anger.

One of the fascinating things I discovered through two national polls I conducted, and which academic research corroborates, is that women consider people who cry at work “unstable,” which sounds like a chronic and serious character flaw… whereas men see crying at work as at worst “unprofessional” behavior, more suggestive of a forgivable circumstantial lapse. Men in our survey said that after crying their minds felt sharper, the future brighter, and they felt more physically relaxed and “in control” than before the incident. Women? Women felt the exact opposite.

N R:
Are the reasons why people cry, or explode emotionally, at work mainly due to situations experienced in the office or events in their personal lives that are carried to the work place? Of this two, which one is more “frowned upon”?

A K:
I don’t think there is one that is more “frowned upon.” What I do think is that we are very, very confused about the boundaries between the two realms. In the old days — pre-Internet, pre-cell phones — it was a lot easier to believe that work = rational and home = emotional. But now that work and home life bleed into each other constantly, that distinction has become anachronistic and probably self-defeating. People text and e-mail their friends and family members throughout the workday, and they receive messages from colleagues and clients on nights and weekends and during vacations.

The membranes between private life and work, especially office work, have always been porous, but today employers and employees expect accessibility and accountability pretty much round-the-clock. And whereas old-school office memos and business letters generally weren’t expected to be friendly or candid — that is, human — business e-mails most definitely are.

Conversely, what used to be considered private behavior can instantly reverberate at work through social networking. People fire off e-mails late at night only to regret their tone and intent in the cold light of day. Facebook friends from work can stumble on wild-and-crazy pictures from a bachelorette party. Tweets and anonymous mobile video uploads can instantly broadcast unflattering emotional displays by surly customer service employees or misbehaving CEOs.

The conventional wisdom used to be that we brought home the emotions we were unable to express while at work – snapping (or worse) at unsuspecting partners and children. Which is as true as ever. What’s new is that home life — with all its messy, complicated emotional currents, has become inextricably and undeniably woven into the workplace.

N R:
Your study suggests that men cry more than we’d assumed in the workplace; could you explain that in depth?

A K:
I think the conventional wisdom was that men simply didn’t cry in the workplace. That 9% of American men admitted that they did struck me as significant – and with men like John Boehner, the Republican Speaker of the House, or Mitch McConnell, the Republican leader for the U. S. Senate, crying visibly and frequently in public, it strikes me that we’ve reached a turning point in our culture where it is acceptable for men to express emotion. In fact, research reveals that those who “lead from the heart” are viewed as more trustworthy.

N R:
Is crying a good therapy to release stress and maintain productive?

A K:
Tears are nature’s natural emotional reset valve. Tears are not an emotion, but rather are our bodies way to express that an individual has experienced an intense emotion. Psychic tears (as opposed to irritant tears, the kind we release when cutting an onion) happen in response to strong experiences – of joy, sadness, anger, anxiety, fear. Tears help us release hormones that flood our bodies during those times of intense feeling and help us re-establish our baseline equilibrium. Tears also increase our dopamine production, thereby helping to return our bodies to equilibrium – and they are also something akin to the warning lights on our car dashboards. You should pay attention to them – they are a signal communicating that something may be not quite right under the hood. There are many, many different kinds of tears – those of happiness, sadness, anger, frustration, pain, and joy and it’s important, as with warning lights on the dashboard, to figure out which kind you are experiencing and then understand what they are telling you – are you overwhelmed, underappreciated, angry? Then figure out how you want to address those issues. In the book I offer a variety of strategies for how one can do that.

N R:
Why do women feel so guilty after crying after an incident at work while men don’t?

A K:
Once again this is really complicated and I believe social conditioning is one of the primary reasons women feel ashamed after crying at work. And social conditioning fails to take into consideration basic biological differences between the genders. Women produce 6 times the amount of prolactin that men do and prolactin is the hormone that causes tear production. Women also have smaller tear ducts, that’s right, they are anatomically different from men’s so that when women do cry, tears most often will stream down their face, whereas men’s ears merely “tear up.” I think if we were all more educated about our neurobiology, women would feel less regret after crying – acknowledging their tears for the biological impulse, like breathing or a muscle reflex, that they are.

N R:
What are the different personality types you recognized in an ordinary office?

A K:
Based on the responses to over 1,000 regular working Americans in all 50 states, we identified four different primary types of emotion styles. I’ve named these Spouters, Accepters, Believers, and Solvers. Women and men were equally represented in all four groups. There were minimal differences among the four types between income and management levels which means that there is no one “right” type to be. If your reader’s would like to take a very simplified version of the survey they may do so here.

NR:
Can you give us a few tips for controlling our emotions in the work place?

A K:
I offer lots of what I call “emotion management toolkit” suggestions in the book, but if I had to select just one it would be to get outside and walk. If I’m walking in a city, the rich diversity of shops, people or street smells wafting out of restaurants stimulates me in ways that connect interesting new creative dots for me and if I’m walking in nature the rich loaminess of the soil, the chittering birds, frogs and insects calm me and connect me to my spiritual side. I find if I’m cranky or anxious, just walking out my door almost always lifts my mood. Changing perspective helps change your brain chemistry.

Thanks, Anne, for insight into your work and such thorough responses. Now, readers, it’s your turn to share your thoughts and ask Anne your questions. Just click on ‘comments’ at the bottom of this post and follow the prompts. You can even sign in as ‘anonymous’ – it’s as easy as that. And if you want to learn more about Anne and her books, spend some time on her website.